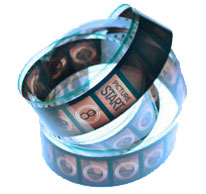 04 4 February 2008, admin 2:24 pm Just got FedEx delivery from North Carolina. I’ve been waiting for this package to arrive and must admit I was very excited to see the name Computer Chronicles on the front . “Computer Chronicles was the world’s most popular television program on personal technology during the height of the personal computer revolution. It was broadcast for twenty years from 1983 – 2002″. Stewart Cheifet Host and producer of the program was very kind and gave us permission to incorporate footage from his archive. Some of Apple’s major developments are documented in great length including the first Macintosh from 1984, the 90s crisis, Steve Jobs keynote from 1998 and so much more. I would like to take this opportunity and thank Mr. Cheifet for all his help!

Now we can go ahead and get the footage to Avid Symphony and close the final stages of this process.